The “Mid-autumn Festival”  中秋节 or commonly known as the “Mooncake Festival” or “Lantern Festival” was my favourite festival when I was a child.  It was the only time, as a child, when I was allowed to “play with fire” and became a fire-starter

.  It falls on the 8th Lunar Month and this year, it is on the 22 September 2010 till 10 October.  However, in Singapore, the festival is most celebration and ended on the 15th day which this year falls on the Wednesday, 22 September 2010.       It is a traditional Chinese occasion dates back over 3,000 years that is spent with family and friends.

What To Do During Mid-Autumn Festival

To celebrate this festival, mooncakes and pomelos are eaten, while activities such as carrying lighted lanterns (提灯笼）, admiring the full moon (赏月）and guessing riddles （猜灯谜）also take place. Join in the fun and experience the friendly festive atmosphere at numerous events such as the Chinatown Mid-Autumn Festival Street Light-up and the Mass Lantern Walk, under the moonlit sky this season.

MoonCake Festival Activities and Things To Do

As this festival is not strongly linked to religion, visitors and different races are encouraged and often seen participating earnestly in the festival activities.  One of the favorite activity, especially for children, is to light and carry lanterns in the various parks and playgrounds.  Lanterns are of different types and styles and the modern day’s lantern usually designed with cute cartoon characters, battery-operated and are easily available at many shops in Singapore.

To experience and feel the atmosphere to its maximum, I strongly suggest you to visit the Chinatown and the Singapore River. Mass Lantern Walk will be a wonderful experience for the visitors and children as well.

Other activities that you can do during the Mid-Autumn festival includes:

1. Mid-Autumn Festival By The River

The Mid-Autumn Festival By The River is back for the 3rd year and even bigger this year.  You will be dazzled by the spectacular lantern displays dotting the river walk and enjoyed the rich culture.

Lanterns are dotted along the Read Bridge, on the banks of the Singapore River, and on the water.  One of the highlights of the festival is the seven special lantern displays with in-built mechanisms to enable parts of the lanterns to move.  Look out for the elaborately crafted lantern displays of the  12 animals of the Chinese zodiac as well. On top of the lanterns, which are specially designed by 33 craftsmen flown in from Sichuan China,  there are games, a food fair and exhibits for visitors to take part in which include:

Where: River Promenade beside the Central Mall The Chinatown Mid-Autumn Festival will showcase colourful and vibrant month-long activities from 9 September to 10 October 2010.  The festival include street celebrations and street Light-out and decorations.

Street Bazaar
Come down and experience the vibrant and bustling Festive Street Bazaar with more than 300 stalls from 11 to 22 September.  Walk to the Pagoda Street, Terrenganu Street and Sago Street where you can find vendors selling mooncakes, souvenirs, lanterns and other festive wares.   For female visitors, you may even want to try on a cheongsam (Chinese traditional dress).

Street Light Up
Chinatown is the best place to get caught up in the excitement with its of its bustling streets lit up by a sea of mesmerizing lights and you’ll also find displays of colorful lanterns all around. Eu Tong Sen Street, New Bridge Road and the streets along Chinatown are decorated with huge lanterns and beautiful lights-up .

Watch the Chinese performing arts showcasing their talents at the Nightly Stage Shows at Kreta Ayer Square in Chinatown (near Buddha Tooth Relic Temple) all through the Mid-Autumn Festival season. Nightly from 11 to 22 September.

On 19 Sep, from 2 to 5pm, catch a special demonstration. Discover the artistry of calligraphy, enjoy the pleasures of tea appreciation, find out how to make mooncakes, and learn how to craft your own lantern, which will be yours to keep. You can even find out more on the spot about mooncake making and other cooking and baking courses with Creative Culinaire The School and Caffe Pralet.

Take part in this FREE Mass Lantern walk, you will carry colourful lanterns in a procession under the moonlit sky. Everyone is welcome to dress up and bring your own lanterns to join in the walk. Just look out for the flickering of candlelight in the open field beside Outram Park MRT Station on 18 Sep at 7.30pm.

The route runs will take you from the heart of Chinatown, down Eu Tong Sen Street, to the banks of the Singapore River, near The Central at Clarke Quay. You’ll pass through festive lights and heritage shophouses, catching a glimpse of a side of Singapore not often seen by visitors.

From July to August, almost 400 participants from 20 Voluntary Welfare Organisations (VWOs) learnt how to make lanterns with recyclable materials in a series of workshops organized as part of Esplanade’s community engagement programme for Moonfest 2010.
Come see some of the selected works that will be displayed at Esplanade. 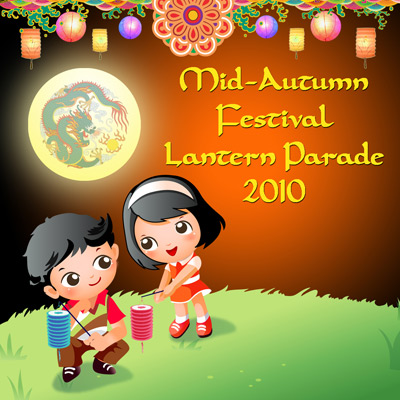 The Mid-Autumn Festival is an auspicious traditional occasion for the Chinese community. In celebration of this festival, Downtown East presents you a Lantern Parade filled with colours and excitement and many other happenings lined up for this special evening!

This year’s celebration will be hosted by Y.E.S. 93.3FM DJ Xie Jiafa. Key highlights for the event include Chinese Whip Act, Wushu Demostration, Song Segment by a Kid Singer, Lantern Quizzes, Stage Games and Dragon Dance. The evening will then come to a grand closure with the Lantern Parade being led by the Dragon Dance Troupe.

Free lanterns and Green Tea will be given out to the first 150 NTUC Members based on a first-come-first-serve basis.

So hurry down and join this Mid-Autumn Celebration! Visit the traditional venue in Singapore for celebrating Mid-Autumn Festival at the Chinese Gardens.  As usual, there will be stunning and enchanting lanterns displays and even fireworks.