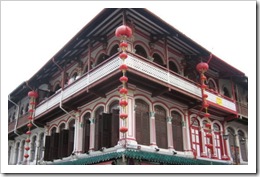 interesting experience to see each race living literally next to each other peacefully.   For example in Chinatown, not only you could see Chinese structures but also other buildings representing other races such as the famous beautiful old Indian temple reside right in the heart of Chinatown.  The Al Abrar Mosque along Telok Ayer Street, and the Jamae Mosque and Sri Mariamman Temple along South Bridge Road lay witness to the harmonious racial and religious atmosphere in Singapore.  It will be an unique sight to see for many visitors.

If you are in Singapore near or during Chinese New Year, you need to put this place as priority to visit to experience the vibrant busy street of Chinatown lined with different kinds of Chinese New Year products and goodies.  The streets will be decked with festive decorations and temporary street market stalls will filled the alleys . Street markets will be thronged with people, there will be shows entertaining the crowds and the loud festive Chinese New Year songs and drums of lion dances will echo into the night.  Chinatown is the place to be during Chinese New Year especially for the midnight countdown and a roar of firecrackers atop People’s Park Complex, showering flaming confetti down below.

If you are visiting Chinatown during other times, it is still a worthwhile visit to catch a glimpse of how olden days Singapore looks like, as you will see some of the alleys and buildings are quite old, traditional and different from other parts of modern Singapore.  Take a ride round Chinatown and discover the nostalgia of living in Singapore’s past.  The Chinese played an important role in Singapore’s history and in making this prosperous city possible. Chinatown was once the hiding place for the people during the Japanese invasion of Singapore.  While Singapore Chinatown is no longer largely Chinese-dominance, the area does retain some of its early days traditional charms.

Even for Singaporean, this place reminds them of how Singapore has evolved so much over short period of time and will be great educational place for children to understand the past and also an introduction to Chinese traditions.  For me, I am guilty of not fully exploring Chinatown and understanding the history and the hidden treasures it could offer.  Hopefully, after writing this article, I will take a second look at Chinatown and visit it more often especially when Chinese New Year is around the corner.

Singaporean commonly refer to and affectionately call Chinatown as “Niu Che Shui”.  Direct translation meaning “bull cart water” which depicts the earlier days and scene of this place with the ox/cow/bull pulling carts filled with water pails or drinking water tanks from the wells in Ann Siang Hill and Spring Street.  In the early days of Singapore when there was no water supply in Chinatown, people living and working there relied on bullock carts for the transportation of water.

Like most of the Chinatown in the world, Singapore Chinatown was the early settlement and traditional Chinese quarters of town.   Singapore Chinatown evolved around 1821 when the first Chinese junk arrived from Xiamen, Fujian province in China. The passengers, all men, set up home around the south of the Singapore River which is known today as Telok Ayer. 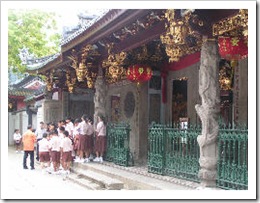 Chinatown can be divided into four main districts – Kreta Ayer, Telok Ayer, Tanjong Pagar and Bukit Pasoh – each with its own distinctive flavor. The heart of activity is in the Trengganu/Smith Streets area. The area between Pagoda Street and Smith Street are frequent by tourists.   Unlike most of predominantly Hokkien Singapore, the dominant Chinese dialect in Chinatown is Cantonese.

Things to Do in Chinatown

Chinatown is a great place for different shopping experience as the things you could get there are quite different and prices are great with many locals shopping around there as well.  For many foreigners and locals alike, this is a great place to get some taste of local dishes while you could still find major cuisines of the world  easily available around the vicinity.   Tanjong Pagar is the unofficial home of Singapore’s gay community, with many watering holes in restored shop-houses, while Club Street caters more to the expat and yuppie crowd with small, intimate eateries offering excellent Western fare. Visit the many restored shop-houses full of strange little shops selling everything from plastic Buddha to exotic Chinese products such as dried seahorses.

Places of Interests in Chinatown

In Chinatown you could find some of the oldest Singapore structures such as one of the oldest Hindu temple, the oldest Hokkien Chinese temple and one of the oldest Mosque. Temples, mosques, noisy coffee shops, calligraphers, medical halls,  food street, markets, shop-houses are the main attractions and latest addition is the Buddha Tooth Relic Temple.

Thing To Do and Buy In ChinaTown

The central streets of Chinatown are packed with small stalls selling all sorts of Chinese related products. You could find a cluster of  antique shops (quite expensive) on South Bridge Rd.  There are numerous shopping malls selling Chinese handicrafts, antiques, fashion items, home accessories and Chinese medicine.  There are many eateries that you could try the local dishes and relaxations at the many massage parlours.  You could find some bargains from embroidered kimonos to T-shirts, tourists souvenirs, pottery and traditional arts and crafts.  Try also visiting some of the interesting shops watching how clogs, painted masks, waxed paper umbrellas, Chinese medicines and kites are made.

Places you could do some shopping and get some souvenirs are:

Try some delicious local food and meet the locals at these good and cheap food centres: Time spent: Take a full day to fully explore the different places of interest and different activities there.  Start with early morning breakfast at one of the local noisy coffeeshops and end the day visiting the night markets stalls.

Day to visit: Any time and day.  However the best period to visit is 2-3 weeks before and during the Chinese New Year.

The easiest way to get to Chinatown in by MRT. 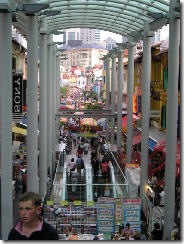 Exit A (Pagoda Street) of North-East MRT line’s Chinatown station will deposit you right in the heart of the action. .

You need to refer to maps and where you want to visit and the following are the likely location that you will alight.