Singapore is one of the best city to experience Chinese New Year as  the majority of population is Chinese and many of the places are easily accessible.

Many of the Chinese New Year traditions are passed down and practiced here since the day when the first Chinese immigrants came from mainland China.

Further to my previous post of “Singapore Chinese New Year Celebration 2010”,  here are more ideas of where you can go during this festive session in Singapore.  What’s more, most of the places recommended are FREE!

This is a MUST place to visit if you have not been to one before to experience one of the longest event held during Chinese New Year.  Now in its 24th year, this festival takes place on The Float in Marina Bay and you are encourage to join the party.  There’s always a great CNY atmosphere at the River Hong Bao.

between Singapore and the city of Chengdu.  There are many fun activities to do such as watching a demonstration of Chinese cooking or Chinese papercraft, watching the acrobats on stage and the fantastic dancers in their beautiful costumes.  The performances will be put up by 45 performers from Chengdu, 40 from Taiwan, and others from Singapore. The festival will also offer the chance to taste Chengdu delicacies and purchase handicrafts from the region.

As part of the tradition, you will also see the magnificent Chinese lanterns on display.   Visitors to this year’s River Hongbao can expect to see the largest lantern display ever held on the floating platform at Marina Bay.  There will be 88 groups of lanterns from Chengdu with the largest one is about 18m tall.  Some of the popular themed lanterns set to be on display include God of Fortune and Chinese Zodiac, while there will also be a chance to look for less well-known examples of the art, such as Panda Playground and Tiger Mountain.  The exhibition will also feature lanterns made of sugar and porcelain spoons. 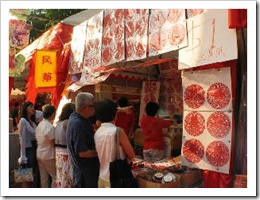 And be sure to watch  the fireworks displays.

Where: The Floating Platform @ Marina Bay.

Direction:  Take MRT to City Hall Station and follow the directions to Esplanade Theatres.  Walk along the bay and see the signboard.

If you happen to be near Clarke Quay, do check out these events that are happening during this period: